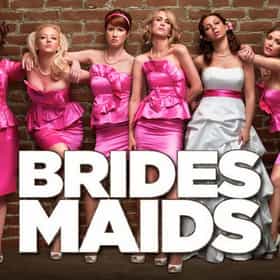 Bridesmaids is a 2011 American romantic comedy film directed by Paul Feig, written by Annie Mumolo and Kristen Wiig, and produced by Judd Apatow, Barry Mendel, and Clayton Townsend. The plot centers on Annie, who suffers a series of misfortunes after being asked to serve as maid of honor for her best friend, Lillian, played by Maya Rudolph. Rose Byrne, Melissa McCarthy, Ellie Kemper, and Wendi McLendon-Covey co-star as Lillian's bridesmaids, with Chris O'Dowd, Rebel Wilson, Matt Lucas, Michael Hitchcock, and Jill Clayburgh, in her final film appearance, playing key supporting roles. Actresses Mumolo and Wiig crafted the screenplay after the latter's casting in producer Apatow's comedy ... more on Wikipedia

Behind The Scenes Of How 'Bridesmaids' Became A Comedy Classic 13.8k views Bridesmaids is one of those movies that came out of nowhere but managed to grab everyone's attention. Its success can be att...
What to Watch If You Love Bridesmaids 779 votes While Bridesmaids was a truly unique female-led comedy that was a massive box office hit, there are plenty of movies and TV ...

Bridesmaids is ranked on...

Bridesmaids is also found on...