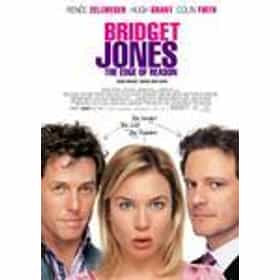 Bridget Jones: The Edge of Reason

Bridget Jones: The Edge of Reason is a 2004 English-French-American romantic comedy film directed by Beeban Kidron, based on Helen Fielding's novel of the same name. It stars Renée Zellweger as Bridget Jones, Colin Firth as Mark Darcy, and Hugh Grant as Daniel Cleaver. It is the sequel to Bridget Jones's Diary. There are significant differences in the storylines between the novel and this film adaptation, and between the United States and United Kingdom versions of the film, including alternative beginning and endings. ... more on Wikipedia

Bridget Jones: The Edge of Reason is ranked on...

#158 of 803 The Greatest Chick Flicks Ever Made 417k VOTES Here's a list of the greatest chick flicks ever, ranked by fans and casual critics like you. The best girl movies are those ...
#942 of 1,007 The All-Time Greatest Comedy Films 424.7k VOTES The best comedy movies of all time are listed here, in one convenient list to be voted on and ranked by true fans. Thes...
#72 of 148 The Best Movies of 2004 11k VOTES A list of the best movies of 2004, from dramas like Crash to critically acclaimed films like Sideways. The '00s were a decad...
#22 of 29 The Best British Romance Movies 3.3k VOTES Jane Austen is a British national treasure, giving Brits special claim to the romantic movie genre she very nearly invented....
#22 of 22 The Best Movies About Dating In Your 30s 75 VOTES Dating in your 30s presents a unique set of challenges. The wild days of your 20s are gone, and you start thinking about you...
#23 of 39 The Best Renée Zellweger Movies 252 VOTES The best Renée Zellweger movies are the ones that give her a chance to really show off her acting capabilities. She d...
#4 of 26 The Best Celia Imrie Movies 128 VOTES List of the best Celia Imrie movies, ranked best to worst with movie trailers when available. Celia Imrie's highest grossing...
#39 of 70 The Best Chick Flicks From The 2000s 374 VOTES The decade that saw millennials into their teen years also put out some good chick flicks. This list of the best 2000s ...
Highest Grossing Films in the UK 7.4k VIEWS List of the highest-grossing films of all time in the United Kingdom. In May 2012, the superhero comic adaption <i>Ave...

Bridget Jones: The Edge of Reason is also found on...