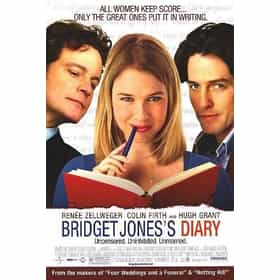 Bridget Jones's Diary is a 2001 British romantic comedy film directed by Sharon Maguire. It is based on Helen Fielding's novel of the same name which is a reinterpretation of Austen's Pride and Prejudice. The adaptation stars Renée Zellweger as Bridget, Hugh Grant as the caddish Daniel Cleaver and Colin Firth as Bridget's "true love", Mark Darcy. Production began in May 2000 and ended in August 2000, and took place largely on location in London and the Home Counties. Bridget Jones's Diary premiered on 4 April 2001 in the UK and was released to theaters on 13 April 2001 simultaneously in the UK and in the US. The film received positive reviews and was a commercial ... more on Wikipedia

Bridget Jones's Diary is ranked on...