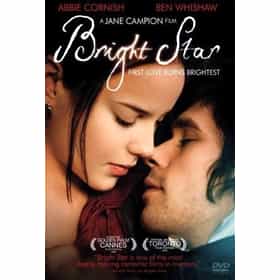 Bright Star is a 2009 film based on the last three years of the life of poet John Keats and his romantic relationship. A British/Australian co-production, it was directed by Jane Campion, who wrote the screenplay and was inspired by the biography of Keats by Andrew Motion, who served as a script consultant on the film. The film competed in the main competition at the 62nd Cannes Film Festival, and was first shown to the public on 15 May 2009. ... more on Wikipedia

Bright Star is ranked on...

Bright Star is also found on...