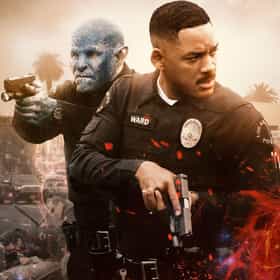 Bright is a 2017 American urban fantasy action crime film directed by David Ayer. In an alternate present where humans and fantasy creatures have co-existed since the beginning of time, human LAPD officer Daryl Ward (Will Smith) and Orc rookie officer Nick Jakoby (Joel Edgerton) embark on a routine patrol night, only to discover an ancient magic wand and encounter a darkness that will ultimately alter the future and their world as they know it. ... more on Wikipedia

Bright is ranked on...

#28 of 61 The Best Buddy Cop Movies 8.1k VOTES List of the best buddy cop movies. On this page, you will find the rankings of the greatest buddy movies about cops that hav...
#31 of 39 The Best Netflix Original Movies of 2017 1.1k VOTES Netflix continues to innovate the world of television and movies with its own original material, and there were plenty excit...
#51 of 62 The Worst Movies of 2017 13.7k VOTES From bad sequels to disappointing reboots, the worst movies of 2017 are a variety of unfunny comedies and boring films. What...
#35 of 61 The Best New Sci-Fi Movies of the Last Few Years 7.3k VOTES Modern science fiction movies provide audiences with a wide range of subject matter. The genre offers a lot of flexibil...
#12 of 33 The Best Action Movies Streaming on Netflix 37.1k VOTES All the best action movies on Netflix streaming are listed in one convenient place so you can fully utilize your Netflix ser...
#10 of 223 The Best Netflix Original Movies 23.7k VOTES Here are the best Netflix original movies currently streaming online on Netflix, ranked from the most popular to the least b...
#11 of 35 The Best Fantasy & Sci-Fi Movies on Netflix 19.9k VOTES The best sci-fi movies on Netflix is a complete streaming list for your perusal. All the good sci-fi and fantasy films on Ne...
#2 of 30 The Best Fantasy Movies On Netflix 3.5k VOTES Fantasy, fantasy, what are fantasy movies? Well, we all know what they’re surely not. They’re not movies about winning the l...