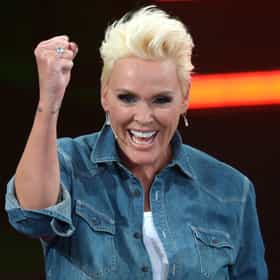 Brigitte Nielsen (Danish pronunciation: [pʁiketə ˈnelsn̩]; born Gitte Nielsen; 15 July 1963) is a Danish actress, model, singer and reality television personality who began her career modeling for Greg Gorman and Helmut Newton and several years later acted in the 1985 films Red Sonja and Rocky IV, later returning to Rocky series in Creed II (2018). She is also known for her marriage to Sylvester Stallone, with whom she starred in the 1986 film Cobra. She played Karla Fry in Beverly Hills Cop II (1987) and the Black Witch in the 1990s Italian film series Fantaghiro. She later built a career starring in B-movies, hosting TV shows, and appearing on reality shows. ... more on Wikipedia

Brigitte Nielsen is ranked on...

#96 of 165 If You Fought To The Death, Who Would You Want By Your Side? 71.2k VOTES Fighting to the death. You know you’ve thought about it; pop culture has definitely made you consider it. In the e...
42 Celebrity Women Who Gave Birth After 40 80.1k VIEWS List of Celebrity Women Who Gave Birth After 40, ranked by fame and popularity. Studies have shown that women are now waitin...
Famous People Named Bridget & Brigitte 10.5k VIEWS Have you ever realized how many famous people named Bridget there are? We put together this list of celebrities named Bridge...
#20 of 30 Hottest Danish Models 13.1k VOTES List of the hottest models from Denmark, as voted on by the Ranker community. These Danish models have been featured in fash...
Sean Penn's Loves & Hookups 100.8k VIEWS Who is Sean Penn dating? Who Sean Penn dated; list of Sean Penn loves, ex girlfriends; marriages and breakup rumors. The lov...
Actors Who Were THIS CLOSE to Playing Superheroes 2M VIEWS We’re sure that some people think that it’s easy to slap together a superhero movie, but a good movie, especially a good sup...
Celebrity Babies Who Were Born In 2018 43.9k VIEWS If you're interested in all things celebrity gossip, you probably keep tabs on the newest celebrity babies to hit the headli...

Brigitte Nielsen is also found on...