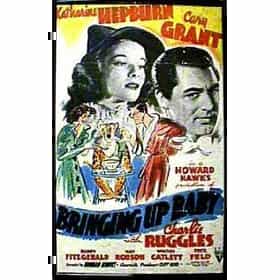 Bringing Up Baby is a 1938 American screwball comedy film directed by Howard Hawks, starring Katharine Hepburn and Cary Grant, and released by RKO Radio Pictures. The film tells the story of a paleontologist in a number of predicaments involving a scatterbrained woman and a leopard named Baby. The screenplay was adapted by Dudley Nichols and Hagar Wilde from a short story by Wilde which originally appeared in Collier's Weekly magazine on April 10, 1937. The script was written specifically for Hepburn, and was tailored to her personality. Filming began in September 1937 and wrapped in January 1938; it was over schedule and over budget. Production was frequently delayed due to ... more on Wikipedia

Bringing Up Baby is ranked on...

Bringing Up Baby is also found on...