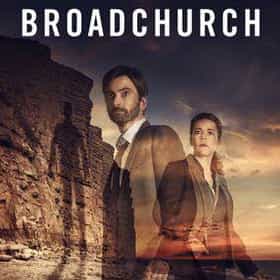 Broadchurch is a British television drama broadcast on ITV. It was created and written by Chris Chibnall and produced by Kudos Film and Television, Shine America, and Imaginary Friends. The first series focused on an 11-year-old boy and the impact of grief, mutual suspicion, and media attention on the town. Series one premiered on 4 March 2013. Filming for series two began in late May 2014, concluded on 12 October 2014, and began its ITV broadcast on 5 January 2015. Series three was confirmed on 23 February 2015, immediately following the series two finale. ... more on Wikipedia

What To Watch If You Love 'Broadchurch' 210 votes If you just finished Broadchurch and feel like it’s left a gaping hole in your life, there’s no need to despair. We’ve compi...

Broadchurch is ranked on...

#166 of 802 The Best TV Shows To Binge Watch 1.3M VOTES Bored? Not anymore! These are the best TV shows for binge-watching. The greatest television shows in the world are ranked he...
#231 of 383 The Best TV Shows of The Last 20 Years 1.5M VOTES This best TV show list represents the combined opinions of thousands of TV fans. Anyone can vote on this list of the best TV...
#6 of 30 20+ Current British TV Shows You've Been Missing This Whole Time 8.2k VOTES If you're an Anglophile at heart, this list of under the radar British TV series is for you. Everyone's heard of shows like&...
#35 of 67 The Best Crime Fighting Duo TV Series 23.2k VOTES Sometimes the best TV crime series are is based on a duo of great crime fighting duos rather than an ensemble cast or one he...
#48 of 123 The Best Serial Cop Dramas of All Time 38.8k VOTES The best serial cop dramas of all time include long-running police television shows that managed to combine elements of myst...
#4 of 40 What to Watch If You Love 'Sherlock' 875 VOTES Sherlock is a gripping action/mystery that garnered the love and affection of hordes of fans, but if you’ve finished watchin...
#1 of 32 The Very Best British Procedurals, Ranked 2.5k VOTES   Drama is injected throughout every single step of the crime solving process on the best British procedurals. The to...
#24 of 25 What to Watch If You Love Fargo 717 VOTES If you’re looking for other movies like Fargo, you’ve come to the right place. When it comes to the best black comedy movies...
#46 of 63 The Most Anticipated Summer 2013 TV Shows 11.1k VOTES The most anticipated summer 2013 TV shows include several returning series that consistently attract millions of viewers, bu...
#44 of 51 The Best TV Dramas of 2013 7.4k VOTES Drama television shows often get a lot of attention from viewers and critics because they have a bit of everything. There is...
#40 of 171 The Best Mystery TV Shows 71.7k VOTES The best Mystery TV shows make trying to solve a great mystery exciting for both the fans and characters. Nothing beats the ...
#64 of 356 The Best Streaming Netflix TV Shows 5.3M VOTES The best streaming Netflix TV shows include some great television dramas, sci-fi/adventure shows, sitcoms, and reality TV pr...
#31 of 66 The Best Suspense TV Shows 5.2k VOTES The very best suspense shows on television, ranked from best to worst. This list of the greatest suspense shows also include...
#13 of 38 The Best TV Shows That Deal with Grief 316 VOTES Grief can often be an all-consuming feeling that makes you feel all alone in the world. But the fact is, nearly everyone has...
#44 of 63 The Very Best Mystery Shows & Movies 718 VOTES There's something about good mystery movies and television shows that keep you on the edge of your seat. Are ...
#2 of 85 The Best Mystery Shows On Netflix 8.5k VOTES Here are the best mystery shows streaming now on Netflix. Whether you're looking for detective shows or whodunits, this list...
#2 of 35 The Best British TV Dramas On Netflix 10.9k VOTES Here are the best British drama shows streaming now on Netflix. Whether you're looking for crime dramas or historical fictio...