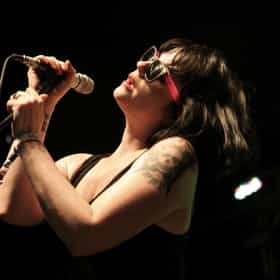 Brody Dalle (born Bree Joanna Alice Robinson; 1 January 1979) is an Australian singer-songwriter and guitarist. Dalle began playing music in her adolescence, and moved to Los Angeles, California at age eighteen, where she founded the punk rock band The Distillers. The group released three albums before disbanding in 2006. Dalle began another project, Spinnerette, releasing an eponymous album in 2009. In 2014, she released Diploid Love, her first album under her solo name. ... more on Wikipedia

Brody Dalle is ranked on...

#124 of 158 People who voted for Brody Dalle... People outside of the US are 2x more likely to vote for this also upvote Alien Franchise on The Best Movies of All Time The Best Female Rock Singers 413.1k VOTES Best female rock vocalists of all time include some of the greatest girl rock singers ever. This list includes some of the m...
Celebrities Who Self-Harm 485.2k VIEWS List of celebrities who self-harm, loosely ranked by fame and popularity. Self-harm is when an individual inflicts an injury...
Famous Lead Guitarists 29.9k VIEWS A List of Famous Lead Guitarists with photos! These are musicians who are masters of their craft. While it is often the sing...

Brody Dalle is also found on...