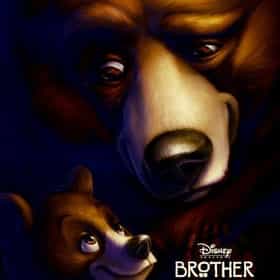 Brother Bear is a 2003 American animated adventure comedy-drama film produced by Walt Disney Feature Animation and released by Walt Disney Pictures. It is the 44th animated feature in the Walt Disney Animated Classics series. In the film, an Inuit boy named Kenai pursues a bear in revenge for a battle that he provoked in which his oldest brother Sitka is taken out. He tracks down the bear and take it out, but the Spirits change Kenai into a bear himself as punishment. In order to be human again, Kenai must learn to see through another's eyes, feel through another's heart, and discover the meaning of brotherhood. ... more on Wikipedia

Brother Bear is ranked on...

#89 of 598 People who voted for Brother Bear... People in the Northeast are 2x more likely to vote for this The Best Animated Films Ever 971.4k VOTES The best animated movies of all time are an assortment of animated movies that rank among the best movies ever made. Wh...
#839 of 1,017 The All-Time Greatest Comedy Films 430.2k VOTES The best comedy movies of all time are listed here, in one convenient list to be voted on and ranked by true fans. Thes...
#340 of 551 The Best Movies of the 2000s 72.7k VOTES List of the best films released between the years 2000 and 2009, the era frequently referred to as the '00s or the "aug...
#15 of 58 The Best Disney Movies Starring Animals 3.2k VOTES Walt Disney Studios has put out some great Disney movies with animals. This list will determine the best Disney animal movie...
#18 of 88 Animated Movies That Make You Cry the Most 60.9k VOTES The best animated movies can be just as emotional as even the most moving live action tearjerker. Admit it, there are animat...
#78 of 181 The Greatest Animal Movies Ever Made 61.1k VOTES Some of the best and most beloved movies feature cute pets, barnyard critters, jungle animals, and dangerous beasts. What is...
#28 of 149 The Best Movies of 2003 10.5k VOTES A list of the best movies of 2003, from dramas like Mystic River to critically acclaimed films like American Splendor. The '...
#11 of 15 Disney Movies That Will Make You Cry 3.7k VOTES This list is about ranking sad Disney movies from best to worst by user votes. The best sad Disney movies come in many ...
#42 of 58 The Best Disney Animated Movies 158.3k VOTES This list of Disney animated movies are classics that have been ranked and voted on by fans. Walt Disney Studios b...
#28 of 100 The Highest-Grossing G Rated Movies Of All Time 781 VOTES Look for the G rated movies that made the most money at the box office? Then you are in the right place, here are the highes...
#163 of 588 The Best Fantasy Movies 907.9k VOTES A list of the best fantasy movies ever made. This fantasy film list can be sorted by cast, year, director and more. This lis...

Brother Bear is also found on...