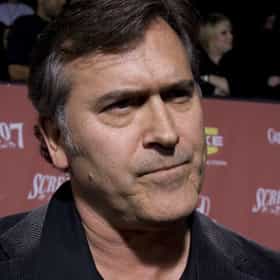 Bruce Lorne Campbell (born June 22, 1958) is an American actor, producer, writer and director. One of his best-known roles is portraying Ash Williams in Sam Raimi's Evil Dead franchise, beginning with the 1978 short film Within the Woods. He has starred in many low-budget cult films such as Crimewave (1985), Maniac Cop (1988), Sundown: The Vampire in Retreat (1989), and Bubba Ho-Tep (2002). In television, Campbell had lead roles in The Adventures of Brisco County, Jr. (1993–94) and Jack of all Trades (2000), starred as Autolycus (the King of Thieves) in Hercules: The Legendary Journeys and Xena: Warrior Princess (1995–99), Sam Axe on the USA Network series Burn Notice (2007–13), and ... more on Wikipedia

Bruce Campbell is ranked on...

#608 of 1,151 The Best Actors in Film History 2.2M VOTES The best actors ever are ranked here in this list of the best actors in film history. These are the greatest actors ever to ...
#209 of 337 The Coolest Actors Ever 735.2k VOTES As movie fans, we like to think of our favorite actors as being larger than life. With all of the coverage that these stars ...
#262 of 333 The Greatest Actors Who Have Never Won an Oscar (for Acting) 452.3k VOTES There are many actors who haven't won an Oscar. For 95 percent of the acting population, there is probably a good reason the...
#189 of 505 The Best TV Actors of All Time 107.1k VOTES The greatest TV actors of all time. Some of these actors have been in movies, some of them are even more well known at this ...
#222 of 527 People who voted for Bruce Campbell... Men are 2x more likely to vote for this Famous Men You'd Want to Have a Beer With 1.8M VOTES If given the opportunity to sit down for a beer with any famous male figure, which famous men would you most want to get a d...
#474 of 514 Celebrities Nobody Cares About Anymore 3.4M VOTES Some of the greatest actors of all time have, in recent days, turned into a bunch of washed-up hacks that would be somehow b...
#104 of 165 If You Fought To The Death, Who Would You Want By Your Side? 71k VOTES Fighting to the death. You know you’ve thought about it; pop culture has definitely made you consider it. In the e...
#15 of 20 If You Had To Be Trapped In An Elevator With Any Celebrity, Who Would You Choose? 3k VOTES For most, even the idea of being trapped in an elevator can induce a fit of claustrophobia - and, frankly, most people would...
#19 of 23 23 Magic Cards That Look Like Celebrities 12.1k VOTES A collection of Magic Cards that look eerily too similar to famous people. Sure, your girlfriend probably hates it when you ...
#776 of 868 Celebrity Death Pool 2016 370.1k VOTES Celebrity death pool 2016: Here's a large list of celebrities we think just might die this year. The only certainties in l...
#26 of 37 The Most Grizzled Actors Currently Working 703 VOTES Many of Hollywood's most grizzled actors make up some of the best the industry has produced over the past century. What make...
#9 of 20 The Top Actors Who Should Play J. Jonah Jameson 4.3k VOTES J. Jonah Jameson has been left out of the Marc Webb Spider-Man films, and for good reason. J.K. Simmons, who played the char...
#24 of 150 Who Do You Wish Would Guest Star on the Muppet Show? 7.6k VOTES Following their brand-new big screen Disney adventure, "The Muppets," Jim Henson's stable of beloved felt characte...
#67 of 69 People who voted for Bruce Campbell... also upvote Albert Finney on The Best Actors Working Today also upvote Mads Mikkelsen on The Best Actors Working Today 2013 TV Awards: Best Actor in a Network Drama 58k VOTES This list of 2013 TV awards is for best actor in a network drama series, so add your picks, please. A slew of great networ...
Famous People Named Bruce 37.3k VIEWS List of famous people named Bruce, along with photos. How many celebrities named Bruce can you think of? The famous Bruces b...
#15 of 26 The Best Actors Who Played Rock Stars On Film 4.3k VOTES Several famous rock stars have led lives so intriguing and/or troubling that they've inspired enviable acting roles. Fr...
Actors Who Played Multiple Roles in the Same Film 76.1k VIEWS Several famous actors and actresses have played different characters in the same movie. Sometimes actors play characters who...
Famous People Whose Last Name Is Campbell 8.9k VIEWS Being a fairly common name, it's no surprise there are a lot of famous people with the last name Campbell. Do you recognize ...
The 20 Actors In The Most Coen Brothers Movies 10.7k VIEWS Joel and Ethan Coen love to repeatedly use the same actors in their films. Six different actors have appeared in four or mor...
11 Actors Who Have Played Elvis Presley 10.2k VIEWS Many of Hollywood’s biggest names have taken their turn at playing Elvis Presley over the years. Some performances are parti...
Celebrities Who Live in Oregon 4.6k VIEWS This list includes information about celebrities who live in Oregon, loosely ranked by popularity. Celebrities that live in ...

Bruce Campbell is also found on...