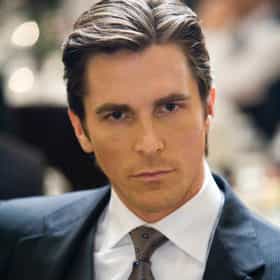 Bruce Wayne is the secret identity of Batman, the fictional superhero appearing in American comic books published by DC Comics. Wayne a wealthy American playboy, philanthropist, and owner of Wayne Enterprises. After witnessing the murder of his parents Dr. Thomas Wayne and Martha Wayne as a child, he swore vengeance against criminals, an oath tempered by a sense of justice. Bruce Wayne trains himself physically and intellectually and crafts a bat-inspired persona to fight crime. He resides on the outskirts of Gotham City in his personal residence, Wayne Manor. Wayne averts suspicion by acting the part of a superficial playboy idly living off his family's fortune and the profits of ... more on Wikipedia

Bruce Wayne is ranked on...

#21 of 70 The Best Fictional Characters You'd Leave Your Man For 74.2k VOTES We all like to fantasize and daydream about our favorite hot fictional characters. Maybe you've struck some kind of a deal w...
#10 of 41 The Best Introvert TV Characters 3.2k VOTES Great introvert TV characters show that being introverted is different - and about so, so much more - than ju...
#13 of 15 15 Cinematic Alpha Males You Never Noticed Are Almost Certainly Virgins 3k VOTES You might assume that every moment movie tough guys spend off screen is devoted to romancing a cadre of babes. But is t...
#10 of 13 10 Fictional Characters Who Are Way Richer Than You Think (And 3 Who Are Poorer) 18.5k VOTES Some fictional character's height might be different than you imagine, or they might be a different age than ...
#3 of 23 The Greatest Billionaire Characters in Film 2k VOTES They're rich, powerful, influential – and did we mention rich? Billionaires are popular characters in films, whether these u...
#6 of 15 The 15+ Best Guys In The Chair From Popular Fiction 1.3k VOTES Ned from Spider-Man: Homecoming had it right. Every hero, villain, or franchise needs its "guy in the chair." Hack...
#22 of 43 The Greatest Perpetual Bachelors in TV History 9.7k VOTES List of the best perpetual bachelor TV characters, as ranked by television critics and fans. The bachelor character seems to...
#1 of 23 The Greatest Characters Played by Christian Bale, Ranked 1.1k VOTES This list contains information on the best characters played by Christian Bale ranked from best to worst by user votes. Th...
#1 of 16 The Best Batman and Bruce Wayne Portrayals 2.3k VOTES "Where does he get those wonderful toys?" All the Batmans and Bruce Waynes in one place.  Vote up your f...
15 Comic Book Characters Based On Real People 59.6k VIEWS "Where did you come up with this stuff?" is a common question asked to creators of all types. Many lauded comic bo...
#8 of 23 The Best Characters On 'Gotham' 3.6k VOTES We're ranking the best characters on Gotham. The hit superhero show centers on a young Commissioner Gordon (played by Ben Mc...
#2 of 18 The Best Characters in the Nolan's Dark Knight Series, Ranked 2.5k VOTES Film buffs, we are ranking the greatest characters in Christopher Nolan's The Dark Knight Trilogy. From Batma...
#4 of 19 The Best Rich Kid Characters In TV History 191 VOTES Get your pocketbooks ready as we rank the best rich kid characters in TV history. Whether they’re protagonists, antagonists,...
#36 of 48 The Best Ben Affleck Characters 103 VOTES As an acclaimed actor, director, screenwriter, and producer, Ben Affleck is one of the most recognizable faces in Holly...

Bruce Wayne is also found on...