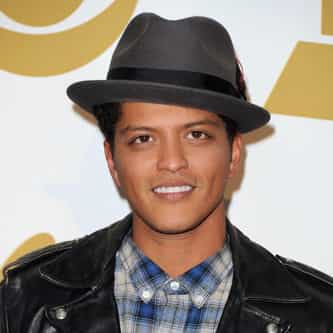 Peter Gene Hernandez (born October 8, 1985), known professionally as Bruno Mars, is an American singer, songwriter, record producer, multi-instrumentalist, and dancer. He is known for his stage performances, retro showmanship, and for performing in a wide range of musical styles, including R&B, funk, pop, soul, reggae, hip hop, and rock. Mars is accompanied by his band, The Hooligans, who play a variety of instruments, such as electric guitar, bass, piano, keyboards, drums, and horns, ... more on Wikipedia

14.8k readers Bruno Mars Is One Of The Biggest Names In Music, But There's A Lot You Still Don't Know About Him

Bruno Mars IS LISTED ON