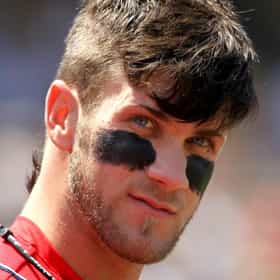 Bryce Aron Max Harper (born October 16, 1992) is an American professional baseball right fielder for the Philadelphia Phillies of Major League Baseball (MLB). He played in MLB for the Washington Nationals from 2012 through 2018. He has been touted as a "five-tool player".Harper graduated from high school early so that he could attend the College of Southern Nevada, where he won the 2010 Golden Spikes Award. The Nationals selected Harper as the first overall pick in the 2010 MLB draft. He made his MLB debut with the Nationals on April 28, 2012, at 19 years old. Harper was selected for the 2012 All-Star Game, becoming the youngest position player to perform in an All-Star ... more on Wikipedia

Bryce Harper is ranked on...

Bryce Harper is also found on...