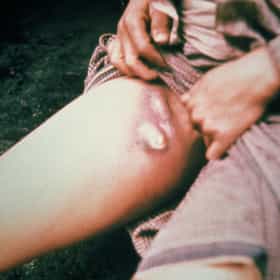 Bubonic plague is a zoonotic disease, circulating mainly in fleas on small rodents, and is one of three types of bacterial infections caused by Yersinia pestis, that belongs to the family Enterobacteriaceae. Without treatment, the bubonic plague kills about two thirds of infected humans within four days. The term bubonic plague is derived from the Greek word βουβών, meaning "groin". Swollen lymph nodes especially occur in the armpit and groin in persons suffering from bubonic plague. Bubonic plague was often used synonymously for plague, but it refers specifically to an infection that enters through the skin and travels through the lymphatics, as is often seen in flea-borne ... more on Wikipedia

An Average Day In The Life Of A 14th-Century Plague Victim 35.7k views The Black Death changed the world. As the most profound epidemic in human history, the plague claimed the lives of millions,...
Horrifying Things Most People Don't Know About Plague Doctors 94.6k views Treating the bubonic plague became a medical specialty during the first widespread outbreak of the disease in the 14th centu...
Things You Won't Believe Europeans Ate During The Plague 15k views When the Black Plague struck Europe in the 14th century, people didn't have much time to worry about their diets. Still, doc...
Extremely Metal Plague Art You Weren't Shown In History Class 822 votes Between 1346 and 1353, an estimated 75-200 million people lost their lives in Europe due to the Black Plague. Men, women, an...
The Bubonic Plague Ravaged San Francisco In The 1900s—And The Government Tried A Massive Cover Up 19.8k views The San Francisco bubonic plague outbreak was one of the biggest health crises — and controversies — of the 20th-century Uni...
What It Was Like To Be A Body Collector During The Bubonic Plague 39.1k views Buboes, black spots, and bloody froth: it was all in a day’s work for Black Death body collectors. The plague, which may hav...
How You Could Have Survived The Black Plague 20.8k views The Black Death was a devastating epidemic, taking around 50 million lives, or more than half of Europe's population. After ...
What Sex Was Like During The Black Death 1M views Have you ever wondered what sex during the Black Plague was like? It sounds sick and twisted, but life goes on, as they say,...

Bubonic plague is ranked on...

#449 of 836 The Scariest Threats to the United States 227k VOTES Lots of stuff to be scared of these days... more than usual, even in our normal fear-based-economy. The media and the pundit...
How Long Do These Diseases And Viruses Live In Your Body After You Die? 2.1k VIEWS Death is a topic many people skirt around, especially if it comes in a traumatic manner. When it involves certain hosti...
All The Afflictions You Might Have If You Lived In A Medieval City 42.5k VIEWS Life in the Middle Ages was dangerous. Whether living in a communal setting, fighting abroad, or simply tending a field, the...
The Secret Role That a Crazy Hallucinogenic Fungus Played in History 7.9k VIEWS The little parasitic ergot fungus loves to live off rye grain. Unfortunately, it turns out, so did the peasant class in Euro...