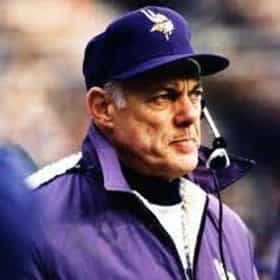 Harry Peter "Bud" Grant Jr. (born May 20, 1927) is a former head coach and player of American football, Canadian football, and a former basketball player in the NBA. Grant served as the head coach of the Minnesota Vikings of the National Football League (NFL) for eighteen seasons; he was the team's second (1967–83) and fourth (1985) head coach. Before coaching the Vikings, he was the head coach of the Winnipeg Blue Bombers of the Canadian Football League (CFL) for ten seasons, winning the Grey Cup four times. Grant is the most successful coach in Vikings history, and the third most successful professional football coach overall (behind Don Shula and George Halas), with a ... more on Wikipedia

Bud Grant is ranked on...

#492 of 1,452 Celebrity Death Pool 2018 477.7k VOTES Welcome to Celebrity Death Pool 2018! In increasingly uncertain times, there remains one constant in life - we all die. Cele...
#27 of 79 The Greatest Minnesota Basketball Players of All Time 4.1k VOTES Minnesota basketball fans, we’re ranking the best Minnesota Golden Gophers of all-time. This list of Minnesota basketball pl...
Famous People Named Buddy & Bud 11k VIEWS Have you ever realized how many famous people named Buddy there are? We put together this list of celebrities named Buddy to...
Famous People Whose Last Name Is Grant 10.1k VIEWS Being a fairly common name, it's no surprise there are a lot of famous people with the last name Grant. Do you recognize all...
#1 of 9 The Best Minnesota Vikings Coaches of All Time 1.9k VOTES There's no question that the Minnesota Vikings have had some fantastic coaches over the years, but who is the best Minnesota...

Bud Grant is also found on...