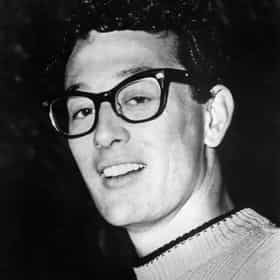 Charles Hardin Holley (September 7, 1936 – February 3, 1959), known professionally as Buddy Holly, was an American musician and singer-songwriter who was a central and pioneering figure of mid-1950s rock and roll. He was born in Lubbock, Texas, to a musical family during the Great Depression, and learned to play guitar and sing alongside his siblings. His style was influenced by gospel music, country music, and rhythm and blues acts, which he performed in Lubbock with his friends from high school. He made his first appearance on local television in 1952, and the following year he formed the group "Buddy and Bob" with his friend Bob Montgomery. In 1955, after opening for Elvis ... more on Wikipedia

What Actually Happened The Day The Music Died? 48.5k views Bob Dylan, Roy Orbison, and Don McLean all have at least one influence in common: Buddy Holly. As a young man, McLean was so...
The Best Buddy Holly Songs 1.2k votes List of the best Buddy Holly songs, ranked by fans like you. This list includes every Buddy Holly single, but true fans know...

Buddy Holly is ranked on...

Buddy Holly is also found on...