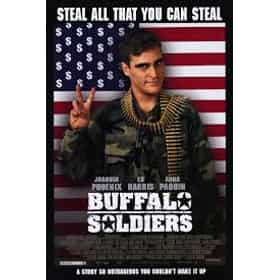 Buffalo Soldiers is a 2001 satire film, based on the 1993 novel by Robert O'Connor, which follows the rogue activities of a group of US soldiers based in West Germany during 1989 when the fall of the Berlin Wall is imminent. It stars Joaquin Phoenix, Ed Harris, Anna Paquin, Haluk Bilginer, Scott Glenn, and Elizabeth McGovern and is directed by Gregor Jordan. The world premiere was held at the 2001 Toronto International Film Festival in early September. However, being a satire of the US military, the film's wider theatrical run was delayed by approximately two years because of the September 11 attacks until it was released on July 25, 2003. ... more on Wikipedia

Buffalo Soldiers is ranked on...

Buffalo Soldiers is also found on...