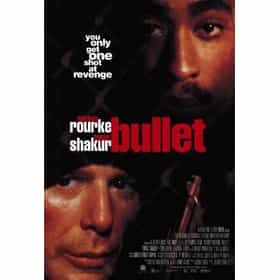 Bullet is a 1996 American crime drama film directed by Julien Temple and starring Mickey Rourke, Tupac Shakur, Donnie Wahlberg, Adrien Brody, Ted Levine, and John Enos III. The screenplay was written by Bruce Rubenstein and Rourke, under a pseudonym. The film was released a month after Shakur's murder. Mickey Rourke was also the music supervisor of the film. It had limited distribution in theaters in the US. It was shot in New York City with a significant portion done in Brooklyn. ... more on Wikipedia

Bullet is ranked on...

Bullet is also found on...