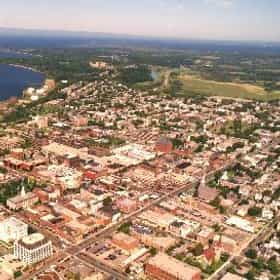 Burlington is the largest city in the State of Vermont and the shire town of Chittenden County. It lies 45 miles south of the U.S.-Canadian border and 94 miles south of Montreal. Burlington had a population of 42,417 at the 2010 census. The city is the hub of the Burlington-South Burlington metropolitan area, consisting of the three northwestern Vermont counties of Chittenden, Franklin and Grand Isle and encompassing the cities of Burlington, South Burlington, and Winooski; the towns of Colchester, Essex, and Williston; and the village of Essex Junction. According to the 2012 U.S. Census estimates, the metro area had an estimated population of 213,701, approximately one third of ... more on Wikipedia

Burlington is ranked on...

Burlington is also found on...