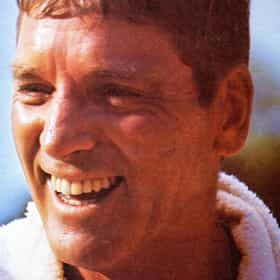 Burton Stephen Lancaster (November 2, 1913 – October 20, 1994) was an American actor and producer. Initially known for playing "tough guys", he went on to achieve success with more complex and challenging roles. He was nominated four times for Academy Awards, and won once for his work in Elmer Gantry in 1960. He also won a Golden Globe Award for that performance and BAFTA Awards for Birdman of Alcatraz (1962) and Atlantic City (1980). During the 1950s his production company Hecht-Hill-Lancaster was highly successful, making films such as Trapeze (1956), Sweet Smell of Success (1957), Run Silent, Run Deep (1958), and Separate Tables (1958). The American Film Institute ranks ... more on Wikipedia

Burt Lancaster is ranked on...

#109 of 329 The Greatest Actors Who Have Never Won an Oscar (for Acting) 468.1k VOTES There are many actors who haven't won an Oscar. For 95 percent of the acting population, there is probably a good reason the...
#134 of 330 People who voted for Burt Lancaster... People over 50 are 5x more likely to vote for this The Coolest Actors Ever 758.7k VOTES As movie fans, we like to think of our favorite actors as being larger than life. With all of the coverage that these stars ...
#33 of 165 The Greatest Western Movie Stars 241.6k VOTES All the greatest Western movie stars of television and film in one list of the best cowboy actors. Some of these top Western...
#65 of 312 Which Actor Would You Bring Back for One Final Movie? 189.9k VOTES We asked, you answered. Fans of the Ranker Facebook page chose which dead actors they’d like to bring back to life for just ...
#13 of 20 Old Hollywood Stars Who Would Be Perfect Casting For Modern Superheroes 4.5k VOTES What if superhero movies were all the rage during the Golden Age of Hollywood? Which old Hollywood actresses and actors woul...
Dashing Leading Men You Had No Idea Fought In WWII 54.5k VIEWS We saw them as our stars – our dashing leading men. We threw awards at them, cheering whenever we saw them, not re...
26 Actors You Didn't Know Were Bisexual 85.9k VIEWS Hollywood is often considered to be at the forefront of discussions about sexual liberation and diversity in America. So per...
34 Famous Movie Stars of the 1950s 392.3k VIEWS The 1950s featured the rise of blonde bombshells, their beautiful brunette counterparts, method actors, and zany comedians. ...
20 Actors Who Actually Do Their Own Stunts 52.9k VIEWS This list runs through famous actors who do their own stunts, loosely ranked by fame and popularity. Actors and actresses ha...

Burt Lancaster is also found on...