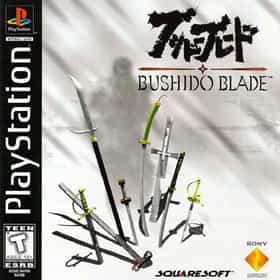 Bushido Blade is a 3D fighting game developed by Light Weight and published by Square and Sony for the PlayStation. The game features one-on-one armed combat. Its name refers to the Japanese warrior code of honor, Bushidō. Upon its release, the realistic fighting engine in Bushido Blade was seen as innovative, particularly the game's unique Body Damage System. A direct sequel, Bushido Blade 2, was released on the PlayStation a year later. Another game with a related title and gameplay, Kengo: Master of Bushido, was also developed by Light Weight for the PlayStation 2. ... more on Wikipedia

Bushido Blade is ranked on...

#74 of 183 The Greatest Fighting Games Ever Made 83k VOTES The best fighting games pit player against player testing reflexes and skill. Fighting games range from the 3D arena fighter...
#17 of 44 The Best Sword Fighting Games Of All Time 2.5k VOTES We’re ranking the best sword fighting games of all time. There are so many iconic swords in video games: the Master Sword fr...
#33 of 52 Video Games You Wish Had an HD Remake 6.6k VOTES In the era of classic games getting HD remakes, there are a lot of opportunities to experience an old game in a whole new wa...
#15 of 126 The Best PlayStation Fighting Games 10.8k VOTES If you owned a PlayStation at any time during your life, then it's safe to say there were probably a few fighting games in y...