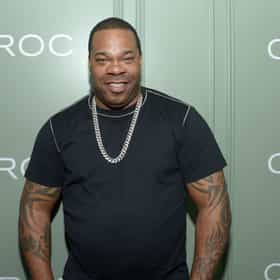 Trevor George Smith Jr. (born May 20, 1972), known professionally as Busta Rhymes, is an American rapper, singer, musician, record producer, record executive, and actor. Chuck D of Public Enemy gave him the moniker Busta Rhymes, after NFL and CFL wide receiver George "Buster" Rhymes. He is best known for his outlandish style and fashion sense depicted in several innovative Hip hop music videos as well as his intricate rhyming technique, rapping at high speed with heavy use of internal rhyme and half rhyme making him one of the fastest rappers of all time. He has received 11 Grammy Award nominations for his work. About.com included him on its list of the 50 Greatest MCs of Our ... more on Wikipedia

Busta Rhymes is ranked on...

Busta Rhymes is also found on...