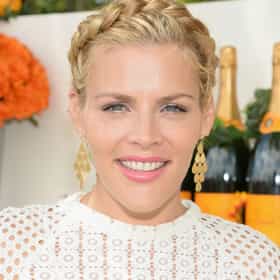 Busy Philipps Had A Career Before Instagram, But She Used Social Media To Turn Herself Into A Star 6.6k views Busy Philipps is the actor behind surly teen Kim Kelly on Freaks and Geeks. She's the hilarious performer behind the efferve...

Busy Philipps is ranked on...

#297 of 505 The Best TV Actors of All Time 107.1k VOTES The greatest TV actors of all time. Some of these actors have been in movies, some of them are even more well known at this ...
#191 of 294 The Funniest Female Comedians of All Time 253.5k VOTES The funniest female comedians star on our favorite sitcoms, perform standup at the top comedy clubs and best of all, make us...
#26 of 56 The Best Female Talk Show Hosts on TV 1.4k VOTES Though the field is expanding, most of the best female talk show hosts are the faces we see and the voices we hear on mornin...
#20 of 24 24 Adorable Old Photos of Celebrities Their Moms Would Probably Love to Show You 5.5k VOTES You may be used to seeing their now-flawless faces on magazine covers, but have you ever wondered what some of your favorite...
#17 of 20 The Best Celebrity Versions Of The FaceApp Challenge 3.6k VOTES The FaceApp challenge swept the internet in July 2019. The challenge is simple: use the FaceApp app's "old&qu...
#47 of 58 Celebrities Who Would Make The Best Maid Of Honor 252 VOTES Who would be your dream celebrity maids of honor? When considering celebrity women who’d make good maids of honor, you want ...
The Cast of Freaks and Geeks: Then and Now 51.9k VIEWS What has the Freaks and Geeks cast been up to? Though the NBC series, from Paul Feig and producer Judd Apatow...
Every Single Celebrity Who Has Guest Starred on Drunk History 7.5k VIEWS Comedy Central's Drunk History has it all, from the boozy narration of notable historic moments to rotating cast members who...
The 40 Ugliest Photos of (Usually Hot) Famous Chicks 3.8M VIEWS Often times for beautiful actresses, ugly-ing it up can be the ticket to Oscar gold. Not in the case of these chicks, who've...
#36 of 41 Dreamcasting Celebrities We Want To See On MasterChef Celebrity Showdown 125 VOTES This is a list of celebrities we would love to see compete on MasterChef Celebrity Showdown. Some famous people who should b...

Busy Philipps is also found on...