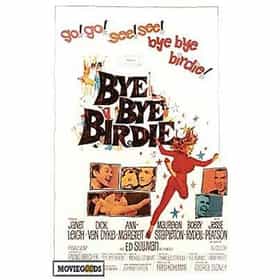 Bye Bye Birdie is a 1963 musical comedy film from Columbia Pictures. It is a film adaptation of the stage production of the same name. The screenplay was written by Michael Stewart and Irving Brecher, with music by Charles Strouse and lyrics by Lee Adams. Directed by George Sidney, the film version starred Dick Van Dyke, reprising his Broadway role as Albert Peterson, along with Maureen Stapleton as Mae Peterson, Janet Leigh as Rosie DeLeon, Paul Lynde reprising his Broadway role as Harry MacAfee, Bobby Rydell as Hugo Peabody, and Ann-Margret as Kim MacAfee. The story was inspired by the phenomenon of popular singer Elvis Presley being drafted into the United States Army in 1957. Jesse ... more on Wikipedia

Bye Bye Birdie is ranked on...

#617 of 804 The Greatest Chick Flicks Ever Made 421.9k VOTES Here's a list of the greatest chick flicks ever, ranked by fans and casual critics like you. The best girl movies are those ...
#13 of 119 The Most Rewatchable Movie Musicals 4k VOTES Musicals are some of the best comfort movies and often we end up memorizing every song. This is a list of musical movies we ...
#18 of 119 The Best Movies of 1963 3.2k VOTES List of the best movies of 1963, with movie trailers when available. With President Kennedy being assassinated in 1963, ma...
#29 of 63 The Best Comedy Movies of the 1960s 6.9k VOTES The 1960s was a great decade for comedy. With the counterculture flourishing, the Cold War looming, and tensions in Vietnam ...
#40 of 420 The Best Columbia Pictures Movies 9.1k VOTES List of Columbia Pictures movies, ranked best to worst, including trailers, genres, and release dates. Columbia Pictures pro...
#3 of 62 The Best Ann-Margret Movies 2.3k VOTES List of the best Ann-Margret movies, ranked best to worst with movie trailers when available. Ann-Margret's highest grossing...
#14 of 30 The Best '60s Romantic Comedies 778 VOTES These are the best 60s Romantic comedies, ranked from best to worst by fan votes. Some good 60s romantic comedies are all ti...
#44 of 163 The Best Musical Movies Rated G 8.3k VOTES A list of the best G-Rated musical movies ever made, ranked by film fans' votes. This list is ordered by popularity, so only...
#5 of 30 The Best Teen Movies of the 1960s 1.6k VOTES Welcome to the teenage wasteland with a list of '60s teen movies. And guess what? They’re all wasted! Here you’ll find the...
#30 of 138 The Best Music Movies 8.9k VOTES A list of all the best music movies ever made, ranked by movie fans. This music movie list can be sorted by cast, year, dire...
#9 of 27 The Best '60s Dance Movies 223 VOTES Dance has long been an important element of any musical, whether you’re talking Broadway or Hollywood. The best '60s dance m...