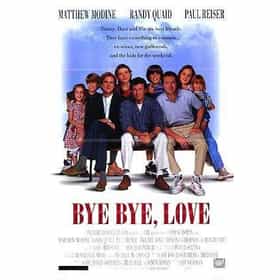 Bye Bye Love is a 1995 American comedy-drama film that deals with the central issue of divorce. It was directed by Sam Weisman and written by Gary David Goldberg and Brad Hall. It stars Matthew Modine, Randy Quaid, Paul Reiser, Janeane Garofalo, Amy Brenneman, Eliza Dushku, Rob Reiner, Amber Benson, and Lindsay Crouse. Production costs were heavily underwritten by McDonald's product placement. Goldberg and Hall stated that they included in the script several fictionalized accounts of events that had happened to divorced friends of theirs. Also acting in the film were Jayne Brook, and Ed Flanders in his last movie role. A not-yet-famous Jack Black has one line as a disc jockey at a ... more on Wikipedia

Bye Bye Love is ranked on...