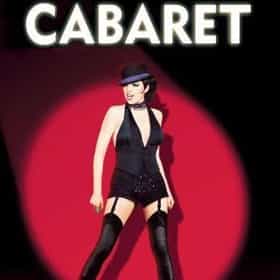 Cabaret is a 1972 musical film directed by Bob Fosse and starring Liza Minnelli, Michael York and Joel Grey. The film is set in Berlin during the Weimar Republic in 1931, under the ominous presence of the growing Nazi Party. The film is loosely based on the 1966 Broadway musical Cabaret by Kander and Ebb, which was adapted from the novel The Berlin Stories by Christopher Isherwood and the 1951 play I Am a Camera adapted from the same book. Only a few numbers from the stage score were used for the film; Kander and Ebb wrote new ones to replace those that were discarded. In the traditional manner of musical theater, every significant character in the stage version sings to express their ... more on Wikipedia

The Best Cabaret Bands/Artists 267 votes Cabaret artists list, with photos, ranked best to worst by votes. List of good cabaret bands includes a filter so you can so...

Cabaret is ranked on...

Cabaret is also found on...

Every Oscar Winning Film Ever Famous Movies Filmed in Germany Gay Movies: List of All Gay Films List of All Movies Released in 1972