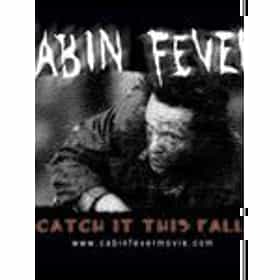 Cabin Fever is a 2002 American black comedy horror film directed by Eli Roth and starring Rider Strong, Jordan Ladd, James DeBello and Giuseppe Andrews. It was produced by Lauren Moews & Evan Astrowsky and executive produced by Susan Jackson. The film was the directing debut of Roth, who co-wrote the film with Randy Pearlstein. The story follows a group of college graduates who rent a cabin in the woods and begin to fall victim to a flesh-eating virus. The inspiration for the film's story came from a real life experience during a trip to Iceland when Roth developed a skin infection. ... more on Wikipedia

Cabin Fever is ranked on...

#17 of 22 Horror Movies You Can't Even Finish Watching 17.7k VOTES A good horror film can genuinely scare the viewer whether with the narrative, the suspense, the monster, or the gore. M...
#10 of 12 Scenes Cut From Horror Movies That Were Just Too Disturbing 56.6k VOTES By definition horror movies are meant to be frightening. They’re a safe trip into the depths of the subconscious, a place to...
#183 of 568 The Greatest Disaster Movies of All Time 98.7k VOTES These are the most entertaining, the most fun, the greatest disaster movies ever made, ranked by movie experts and film fans...
#27 of 89 The Scariest Movies of the 2000s 19.8k VOTES The 2000s were some of the best years in movie history – and the scariest. As far as horror movies go, this decade produced ...
#12 of 47 The Best Horror Movies About Virus Outbreaks 6.4k VOTES There's something in the air, and you definitely don't want to breath it in. Horror movies about viruses and diseases are pa...
#6 of 25 Underrated But Amazing Horror Movies From The 2000s Every Horror Fan Should See 8.3k VOTES The 2000s aren't remembered for having a lot of good horror movies, but you'd be surprised how many gems flew under the rada...
#15 of 137 The Goriest Movies Ever Made 272.6k VOTES Are you a fan of gory movies? If so, you’ve come to the perfect place to find a new favorite gory movie. Go ahead and browse...
#6 of 33 The Scariest Cabin Horror Movies 1.5k VOTES Cabins are creepy enough as it is with their proximity to hungry bears and biting bugs, but add an axe-wielding murderer to ...
#7 of 14 Director’s Cuts Of Horror Films That Are Improvements Over The Originals 146 VOTES Horror fans can be opinionated when it comes to specific cuts of their favorite movies. Things can get especially dicey when...
#5 of 20 Horror Movies That Aren't Really Scary, They're Just Gross 433 VOTES More often than not, the most disturbing horror films are synonymous with their gruesomeness. Movies that focus on gore over...
#30 of 118 The Best Horror Movies of the 21st Century 26k VOTES A list of the Best Horror Movies of the 21st Century. Looking for some recently-made horror movies to enjoy? This list provi...
#63 of 182 The Best Comedy Horror Movies, Ranked 31.3k VOTES Funny horror movies! This is a list list of some of the best comedy horror movies ever made, or horror comedies. Either way ...
#138 of 505 The Scariest Movies Ever Made 549.3k VOTES These are the all-time scariest movies ever made. Many of these movies have become part of the pop culture lexicon due to th...
#71 of 100 The Funniest Horror Movies Ever Made 52.1k VOTES There’s nothing better than a ridiculous comedy horror movie. Whether it’s for a date night or just a timekiller, the funnie...
#161 of 207 The Best Classic Horror Movies 84.6k VOTES If you’re a true horror film enthusiast then you’ll recognize these famous directors and the movies that earned them worldwi...
#18 of 41 The Best Indie Horror Movies, Ranked 2k VOTES This list contains information on the best indie horror movies, ranked from best to worst by user votes. The best indie horr...
#29 of 50 The Best Thriller Movies of 2002 297 VOTES List of the best 2002 thriller movies, ranked by how many upvotes they've received by other fans of the genre. These thrille...
#1 of 16 The Best Eli Roth Movies 339 VOTES List of the best Eli Roth movies, ranked best to worst with movie trailers when available. Eli Roth's highest grossing movie...
Premiere's Hollywood Movies With Deadly Disease Outbreaks 13.6k VIEWS Premiere's top deadly disease outbreak films. These movies feature horrible epidemics as the premise of their story. For the...

Cabin Fever is also found on...