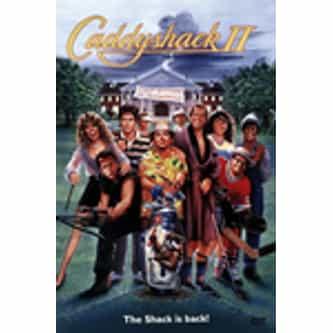 Tagline
The shack is back!

Caddyshack II is a 1988 golf comedy film and sequel to Caddyshack. The film stars Jackie Mason, Dan Aykroyd, Robert Stack, Dyan Cannon, Randy Quaid, Chevy Chase, Jonathan Silverman, and Jessica Lundy. It was written by various outside writers, but is credited to the first draft by Peter Torokvei and Harold Ramis, who also co-wrote and directed the first, and is directed by Allan Arkush. ... more on Wikipedia

Deal of the Century

Caddyshack II IS LISTED ON