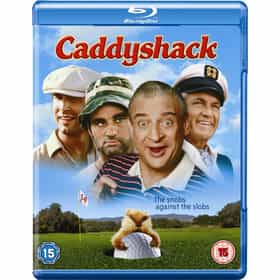 Caddyshack is a 1980 American sports comedy film directed by Harold Ramis and written by Brian Doyle-Murray, Ramis and Douglas Kenney. It stars Michael O'Keefe, Chevy Chase, Rodney Dangerfield, Ted Knight, and Bill Murray. Doyle-Murray also has a supporting role. This was Ramis' first feature film and was a major boost to Dangerfield's film career; previously, he was known mostly for his stand-up comedy. Grossing nearly $40 million at the domestic box office, it was the first of a series of similar comedies. A sequel, Caddyshack II, followed in 1988, although only Chase reprised his role and the film was poorly received. Caddyshack has garnered a large cult following and has been ... more on Wikipedia

Caddyshack is ranked on...

#22 of 626 People who voted for Caddyshack... Men are 2x more likely to vote for this The Greatest Guilty Pleasure Movies 201.9k VOTES   What makes a film a guilty pleasure? This is a movie that you love to watch, but won't display on your DVD shelf......
#12 of 997 The All-Time Greatest Comedy Films 417.6k VOTES The best comedy movies of all time are listed here, in one convenient list to be voted on and ranked by true fans. Thes...
#38 of 575 The Greatest Movies Of The 1980s, Ranked 510.4k VOTES Since it was one of the greatest decades for film, here's a list of the best movies of the 80s. These are the most popu...
#215 of 6,114 The Best Movies of All Time 5.6M VOTES These are the best movies of all time, ranked by movie experts and film fans alike. What are the greatest movies of all time...
#18 of 460 The Most Quotable Movies of All Time 131.7k VOTES The most quotable movies of all time certainly rank among the best movies ever, but there's more than just cinematic excelle...
#72 of 336 'Old' Movies Every Young Person Needs To Watch In Their Lifetime 986.7k VOTES If you're a younger millennial, you've probably heard your older friends and coworkers say things like "Hey, you g...
#65 of 302 The Greatest Soundtracks of All Time 137.9k VOTES The best soundtracks ever are more than just a collection of songs in a particular order; they evoke and accentuates th...
#6 of 123 The Best Movies of 1980 8.4k VOTES 1980 was a rock solid year for movies... these are the best movies made in 1980. From Airplane! to The Empire Strikes back (...
#106 of 376 The Greatest Movie Themes 80.3k VOTES A memorable movie theme song is an underrated crucial element that helps turn a great movie into an iconic one. At its core,...
#3 of 48 The Most Rewatchable Comedy Movies 17.4k VOTES Comedy films are some of the best comfort movies and often the ones we end up quoting the most. This is a list of comedy mov...
#9 of 177 The Best Sports Movies Ever Made 125.8k VOTES Here is the ultimate list of the best sports movies ever made. Most guys, even some girls can't resist a tale about mostly m...
#21 of 44 30+ Very Preppy Movies with the Preppiest Characters 1.2k VOTES We can't all live like the rich, but we can get a glimpse into the world of the preppy elite through great films. Very prepp...
#53 of 158 The Most Inspirational Sports Movies 62.4k VOTES From football movies to baseball films, these are the most inspirational sports movies of all time. This list of the best sp...
#11 of 99 Maxim's Greatest Guy Movies Ranked by Fans 4.7k VOTES This is Maxim's list of the greatest "guy" movies of all time. What makes a movie a guy movie, by Maxim standards?...
#6 of 17 The Funniest Famous Movie Speeches Of All Time 2.5k VOTES Some of the funniest movie speeches ever, not surprisingly, can be found in some of the most hilarious classic film comedies...
#5 of 33 The Best Movies to Watch While Drinking 8.2k VOTES Let’s say you’re headed back from the bar with your friends, it’s 2 am, and you’re all drunk. After you order pizza and grab...
#15 of 35 What to Watch If You Love 'Saturday Night Live' 0 VOTES Saturday Night Live is a brilliant sketch comedy series that garnered the love and affection of hordes of fans, but if you’v...
#147 of 462 The Best Feel-Good Movies 432.9k VOTES Want to feel warm and fuzzy inside? This is a ranked list of the best feel-good movies that make us experience all the good ...
#2 of 53 The Best Bill Murray Movies 14.7k VOTES The best Bill Murray movies, ranked best to worst with movie trailers when available. Bill Murray got his start at Second Ci...
#11 of 197 The Best R-Rated Comedies 10.9k VOTES List of R-Rated comedies, ranked from best to worst with movie trailers when available. These comedies are all R-Rated, so i...
#3 of 62 The Best Chevy Chase Movies 11.5k VOTES List of the best Chevy Chase movies, ranked best to worst with movie trailers when available. Thanks to the TV show Sat...
#3 of 13 The Best Golf Movies 3k VOTES A list of the best golf movies. This is a list of films that feature golf as a central theme. We're pretty sure we've includ...
#10 of 15 The Best Short Movie Monologues 40 VOTES You’ve got less than a minute to impress a casting director or your acting coach. These short movie monologues may just do t...
#1 of 17 The Best Rodney Dangerfield Movies 1.3k VOTES List of the best Rodney Dangerfield movies, ranked best to worst with movie trailers when available. Rodney Dangerfield's hi...
#2 of 50 The Best Comedy Movies of 1980 652 VOTES List of the best 1980 comedy movies, ranked by how many upvotes they've received by other fans of the genre. These are all t...
#2 of 25 The Top 25 Must-See Quintessential Comedy Movies 12.6k VOTES Comedies have been a staple of filmmaking since the dawn of the movie industry, and it's understandable. Who doesn't love a ...
Rotten Tomatoes Highest Rated Movies 1980 345 VIEWS Here is a list of the top 50 highest rated movies from Rotten Tomatoes for 1980. The list is comprised of popular box office...

Caddyshack is also found on...