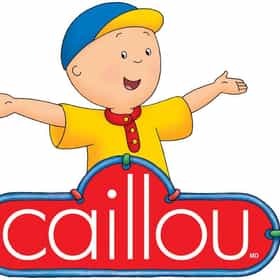 Caillou is a Canadian educational children's television series that was first shown on Télétoon and Teletoon, with its first episode airing on the former channel on September 15, 1997; the show later moved to Treehouse TV, with its final episode being shown on that channel on October 3, 2010. The series is based on the books by author Christine L'Heureux and illustrator Hélène Desputeaux. It centres on a 4-year-old boy named Caillou who is fascinated by the world around him. ... more on Wikipedia

Caillou is ranked on...

#278 of 385 The Best Kids Cartoons of All Time 1.2M VOTES This list contains information about the best kids cartoons, ranked by your votes. Over the years, there have been tons of g...
#402 of 477 The Greatest Animated Series Ever Made 642.2k VOTES The top animated series of all time include some of the best TV shows ever to flicker in your living room (or on your comput...
#3 of 145 The Most Annoying Kids Shows of All Time 84k VOTES There's something about TV shows made for children that can really put the rest of the world on edge. The loudness, the obno...
#112 of 129 The Best Cartoons of the '90s 766.6k VOTES The best cartoons of the 90s are those the top animated series that ran between the years of 1990 and 2000 and features Nick...
#4 of 14 14 Ludicrously Well-Thought-Out Fan Theories About Shows For Children 4.7k VOTES Children's shows are designed to teach digestible, fun, engaging, and interactive lessons, but this often does not...
#170 of 236 The Greatest Cartoon Theme Songs of All Time 163.8k VOTES For entire generations of kids, some of their most fond memories are of watching Saturday morning cartoons. The animated sho...
#8 of 14 The Objectively Worst Cartoon Parents 8.3k VOTES Just as in real life, there are some really dysfunctional families in the cartoon world. And while some animated characters ...
#270 of 686 The Greatest Shows of the 1990s, Ranked 262.9k VOTES In the 1990s, television was one of the fastest growing mediums. More TV shows were popping up than ever before, and ratings...
#49 of 374 The Best Children's TV Shows 49.2k VOTES Here you have it, folks: a list of the very best kids' shows on television, ranked from best to worst, as voted on by people...
#56 of 87 The Best PBS Kids TV Shows Ever, Ranked 108.8k VOTES If you were a kid in the 90s or 2000s, you probably have seen several of the best PBS kids TV shows. Many of those PBS kids ...
#32 of 33 The Best Animated Shows About Families, Ranked 3.2k VOTES These families may be animated, but their mishaps and heartfelt moments are instantly relatable to viewers. The be...
#49 of 51 The Best Family Shows on Amazon Prime 1.5k VOTES There's nothing like sitting back on a night in with your family, and what better way to spend such a night than watching sh...
#40 of 52 The Best Animated Shows On Amazon Prime 1.3k VOTES From kids to adults, everyone can enjoy a nice animated TV show, and there's plenty available on Amazon Prime. From stop-mot...
#9 of 13 The Best Cartoonito TV Shows 697 VOTES List of popular Cartoonito shows, ranked from best to worst. This list of the top current and cancelled Cartoonito TV series...
#11 of 12 The Best Bilingual Shows For Kids 149 VOTES Other than from being a great place to waste a whole day by binge-watching a series that features adults playing teenag...