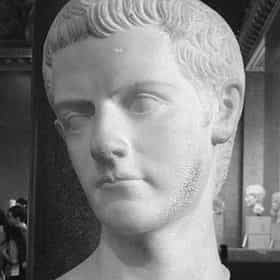 Caligula (; Latin: Gaius Julius Caesar Augustus Germanicus; 31 August 12 – 24 January 41 AD) was Roman emperor from 37 to 41 AD. The son of the popular Roman general Germanicus and Augustus's granddaughter Agrippina the Elder, Caligula was born into the first ruling family of the Roman Empire, conventionally known as the Julio-Claudian dynasty. Germanicus's uncle and adoptive father, Tiberius, succeeded Augustus as emperor of Rome in 14. Although he was born Gaius Caesar, after Julius Caesar, he acquired the nickname "Caligula" (meaning "little [soldier's] boot", the diminutive form of caliga) from his father's soldiers during their campaign in Germania. When ... more on Wikipedia

Caligula is ranked on...

#559 of 2,831 The Most Influential People of All Time 2.4M VOTES This is a list of the most influential people of all of human history. This means that the individuals on this list have had...
#5 of 12 Extraordinary Sexual Habits And Stories Of Royals Throughout History 60.4k VOTES Have you ever wondered what kings and queens got up to in their spare, sexy time in the bedroom? You know, when they we...
#2 of 14 Who Was The Most Self-Indulgent Royal In History? 2.8k VOTES Fountains that ran with alcohol instead of water. Gold chamber pots. An 800-car garage. The most decadent royals in history ...
#5 of 16 Sadistic Rulers From Ancient History 12.5k VOTES Today's elections aren't the only political events with their fair share of nutty candidates. There were plenty of weird anc...
Real Historical Figures Who Inspired Game Of Thrones Characters 412.1k VIEWS We may not have dragons or wights in the real world, but we do have people – and as history shows, people are the strangest ...
The Most Historically Important Perverts Of All Time 1.2M VIEWS These are some of the most influential, famous and historically important human beings of all time (who also happened to be ...
Even History's Most Evil Dictators Had Pets 10.4k VIEWS Most of the facts that we hear about history's most notorious dictators involve their crimes against humanity and horri...
Famous People With Epilepsy 447.2k VIEWS List of famous people with epilepsy, loosely ranked by fame and popularity. Epilepsy is a common set of neurological disorde...
Famous Assassinations in Italy 24k VIEWS Famous assassinations in Italy, including political assassinations, ideological assassinations, and of course mafia and crim...

Caligula is also found on...