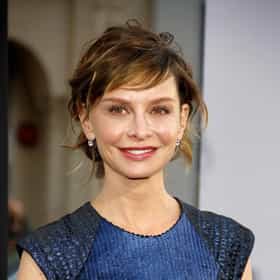 Calista Kay Flockhart (born November 11, 1964) is an American actress. She starred as the title character in the legal comedy-drama series Ally McBeal (1997–2002), Kitty Walker in the drama series Brothers & Sisters (2006–2011) and Cat Grant in the superhero drama series Supergirl (2015–2019). She has also been featured in a number of films, including the comedy film The Birdcage (1996), the romantic comedy film A Midsummer Night's Dream (1999), and the drama film Things You Can Tell Just by Looking at Her (2000). Flockhart has won a Golden Globe Award and Screen Actors Guild Award, and garnered three Emmy Award nominations. She is married to actor Harrison Ford. ... more on Wikipedia

Calista Flockhart is ranked on...

#168 of 389 The Most Overrated Actors Of All Time 1.1M VOTES This list of the most overrated actors of all time, has been ranked by critics and fans from all over the world. Actors are ...
#431 of 514 Celebrities Nobody Cares About Anymore 3.4M VOTES Some of the greatest actors of all time have, in recent days, turned into a bunch of washed-up hacks that would be somehow b...
#890 of 1,582 The Most Beautiful Women in the World 5.7M VOTES Naming the most beautiful women in the world is a difficult task because of how subjective it is. Beauty is a mixture of phy...
#130 of 156 The Most Stunning Celebrity Women Over 50 717.5k VOTES It's hard to believe that some of these famous women are over 50 years old. But like the best fine wines, these ni...
#166 of 186 Who Was America's Girlfriend in 2016? 69.7k VOTES   We all have serious crushes on the people on this list, but only one lady can claim the top spot in our hearts. Who...
#41 of 41 41 Drool-Worthy Celebrity Homes 5.1k VOTES These drool-worthy celebrity houses are among the biggest, most impressive homes of the rich and famous. These are the celeb...
#65 of 87 Guests You Hope to See on Late Show with Stephen Colbert 8.2k VOTES Late Show signed back on with Stephen Colbert at the helm in the summer of 2015, prime presidential election season, and the...
Every Person Who Has Hosted 'Saturday Night Live' 49.6k VIEWS Live from New York! It's Saturday Night! This is a list of all Saturday Night Live hosts, in reverse order,...
Celebrities Who Adopted Children 258.2k VIEWS Thinking of adopting? Let this list of celebrities who adopted children inspire you! Through the years many famous people ha...
The Complete Dating History Of Hollywood Ladies' Man Harrison Ford 281 VIEWS He's one of the seminal actors of his generation, having starred in some of the biggest films of all time.  Harrison Fo...
Celebrities Born On Veterans Day 662 VIEWS Here are all the famous people who were born on November 11 AKA Veterans Day. Featuring actors, musicians, singers...
Robert Downey Jr.'s Loves & Hookups 44.2k VIEWS Who is Robert Downey Jr. dating? Who Robert Downey Jr. dated; list of Robert Downey Jr. loves, ex girlfriends; breakup rumor...
30 Celebrities Who Have Struggled With Anorexia 168.2k VIEWS List of anorexic celebrities, loosely ranked by fame and popularity. Anorexia nervosa is an eating disorder in which an indi...

Calista Flockhart is also found on...