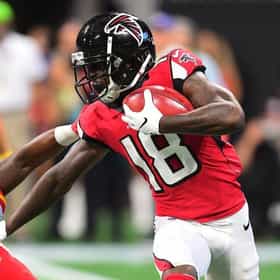 Calvin Orin Ridley (born December 20, 1994) is an American football wide receiver for the Atlanta Falcons of the National Football League (NFL). He played college football at Alabama, and was drafted by the Falcons in the first round of the 2018 NFL Draft. Ridley attended Monarch High School in Coconut Creek, Florida, where he played high school football for the Knights. He played only three games in his senior year due to Florida age restriction rules, which doesn't allow anyone over the age of 19 and nine months to be eligible. Ridley was rated as a five-star recruit and was considered the best receiver in the class of 2015 according to 247Sports, Rivals, and ESPN. He committed to ... more on Wikipedia

Calvin Ridley is ranked on...

#22 of 58 Who Is the Best Wide Receiver in the NFL Right Now? 70k VOTES Catching a football sounds easy, but imagine running across the field with full gear and an elite defender guarding you ever...
#29 of 60 Who Are the Best NFL Players Under 25 Right Now? 16.7k VOTES Being a star football player is one thing, but being known as one of the best NFL players under 25 is quite the impressive a...
#14 of 86 The Best Alabama Crimson Tide Football Players of All Time 59k VOTES This list ranks the best Alabama Crimson Tide players of all time. Football is a way of life in Alabama. The state is home t...
#10 of 28 The Best Sleepers Who Will Surprise Fantasy Owners In 2019 64 VOTES The fantasy football sleepers entering the 2019 NFL season could lead to huge success for your team if you select them in ju...
#51 of 169 The Best Atlanta Falcons of All Time 50.2k VOTES A list of the best Atlanta Falcons of all time. Formed in 1966, the first few decades of the team's history wasn't too promi...
#10 of 35 Who Will Win the 2018 NFL Rookie of the Year ? 38.3k VOTES UPDATE: Head over and make your 2019 NFL Rookie of the Year predictions. With every NFL season, you have plenty of new fac...