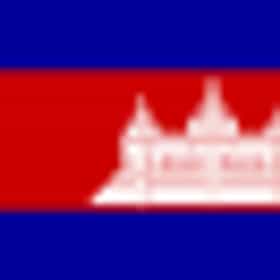 Cambodia, officially known as the Kingdom of Cambodia and once known as the Khmer Empire, is a country located in the southern portion of the Indochina Peninsula in Southeast Asia. Its total landmass is 181,035 square kilometres, bordered by Thailand to the northwest, Laos to the northeast, Vietnam to the east, and the Gulf of Thailand to the southwest. With a population of over 15 million, Cambodia is the 69th most populous country in the world. The official religion is Theravada Buddhism, practiced by approximately 95 percent of the population. The country's minority groups include Vietnamese, Chinese, Chams, and 30 hill tribes. The capital and largest city is Phnom Penh, the ... more on Wikipedia

Cambodia is ranked on...

Cambodia is also found on...