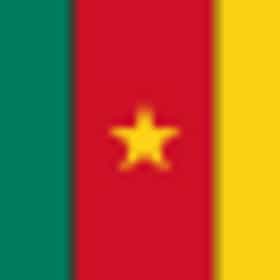 Cameroon, officially the Republic of Cameroon, is a country in Central Africa. It is bordered by Nigeria to the west; Chad to the northeast; the Central African Republic to the east; and Equatorial Guinea, Gabon, and the Republic of the Congo to the south. Cameroon's coastline lies on the Bight of Bonny, part of the Gulf of Guinea and the Atlantic Ocean. The country is often referred to as "Africa in miniature" for its geological and cultural diversity. Natural features include beaches, deserts, mountains, rainforests, and savannas. The highest point is Mount Cameroon in the southwest, and the largest cities are Douala, Yaoundé, and Garoua. Cameroon is home to over 200 ... more on Wikipedia

Cameroon is ranked on...

#210 of 280 The Prettiest Flags in the World 1.3M VOTES What is the best flag in the world? What is the most beautiful flag in the world? Well, these are the best country flags in ...
#37 of 80 Best Soccer Countries Ever 51.4k VOTES The best soccer playing countries of all time. Brazil, Germany, Italy, Spain, Argentina - all the usual suspects. Where do t...
#31 of 32 Who Will Win the 2014 World Cup? 15.7k VOTES A list of what country will win the 2014 World Cup. It is the most watched event in the world, and is considered the world's...
#112 of 248 The Best Countries to Travel To 193.2k VOTES Which country is the best to travel to? The options are endless and vary from person to person. Do you prefer to experience ...
The 71 Countries Where It's Still Illegal to Be Gay 21k VIEWS List of All the Countries Where It's Illegal to Be Gay ranked by notoriety. Although gay marriage is now legal in the U.S. i...
Swine Flu Cases Around The World 6.9k VIEWS List of swine flu cases around the world. Swine flu outbreaks and swine flu countries are found here to show the impact of s...

Cameroon is also found on...