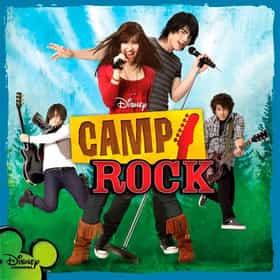 Camp Rock is a 2008 Disney Channel Original Movie directed by Matthew Diamond and starring Demi Lovato, Joe Jonas, Meaghan Martin, Maria Canals-Barrera, Daniel Fathers, and Alyson Stoner. It is about Mitchie (Demi Lovato), a young girl aspiring to be a singer, and her time at Camp Rock, a summer music camp, where she will discover friends, adversaries, romance, and her voice. The film debuted on the American Disney Channel on June 20, 2008. Camp Rock was the second DCOM to air on ABC's The Wonderful World of Disney after its premiere on Disney Channel and was placed on the iTunes Store for digital purchase shortly after its premiere. The film was watched by 8.9 million viewers on the ... more on Wikipedia

Camp Rock is ranked on...

Camp Rock is also found on...