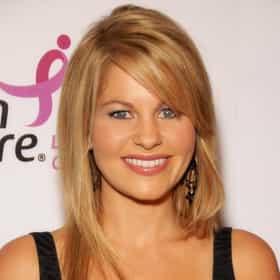 Candace Cameron Bure (; born Candace Helaine Cameron; April 6, 1976) is an American actress, producer, author, and talk show panelist. She is known for her role as D.J. Tanner on Full House, which she reprised as D.J. Tanner-Fuller on Fuller House. She is also known for her work with Hallmark Channel, playing the title character in Hallmark Channel's film adaptation of the Aurora Teagarden novel series, as well having starred in many of their Christmas films. In 2014, she was a contestant on season 18 of Dancing with the Stars, finishing in third place. She also starred as Summer van Horne on Make It or Break It. She is the sister of actor Kirk Cameron, known for Growing Pains. From ... more on Wikipedia

Candace Cameron-Bure is ranked on...

Candace Cameron-Bure is also found on...