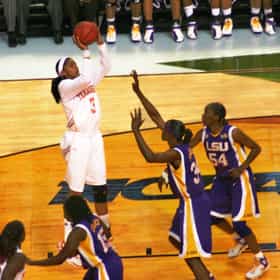 Candace Nicole Parker (born April 19, 1986) is an American professional basketball player who plays for the Los Angeles Sparks of the Women's National Basketball Association (WNBA). She was the first overall pick in the 2008 WNBA Draft. In 2016, along with other stars such as Alana Beard and Nneka Ogwumike, Parker helped the Sparks to win their first WNBA Finals title since 2002. In high school, Parker won the 2003 and 2004 Gatorade National Girls Basketball Player of the Year awards, becoming just the second junior and the only woman to receive the award twice. A versatile player, Parker mainly plays the forward position. In college she was listed on Tennessee's roster as a forward, ... more on Wikipedia

Candace Parker is ranked on...

#676 of 677 Rank the Sexiest Current Female Athletes 145.2k VOTES Athletic women are hot, but when you're a professional athlete who's one of the best at the sport, it makes them even sexier...
#138 of 229 The Best Female Athletes of All Time 47.8k VOTES The greatest female athletes of all time: a list of the most dominant, iconic female athletes to ever play or compete in the...
#1 of 23 The Best Current WNBA Players 23.3k VOTES The best current WNBA players are the most talented and skilled players in the Women's National Basketball Association today...
#122 of 204 The Best Olympic Athletes from United States Of America 4.4k VOTES List of the greatest Olympic athletes from United States of America, with photos when available. These are the best United S...
Famous People Whose Last Name Is Parker 12.5k VIEWS Being a fairly common name, it's no surprise there are a lot of famous people with the last name Parker. Do you recognize al...
#23 of 30 The Best ESPN Magazine Covers 1.8k VOTES List of the most memorable ESPN Magazine covers, featuring the coolest photographs, sexiest celebrity shots, and most innova...

Candace Parker is also found on...