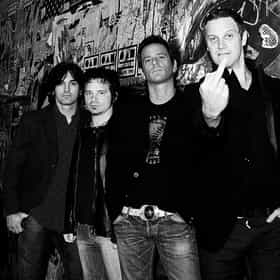 Candlebox is an American rock band from Seattle, Washington. Since its formation in 1990, the group has released five studio albums, which have achieved multi-platinum and gold certification, as well as numerous charting singles, a compilation, and a CD+DVD. Candlebox was the first successful act on Madonna's Maverick Records, which went on to sign Alanis Morissette, Deftones and The Prodigy. They found immediate success with the release of their self-titled debut album in July 1993. It featured some of the band's biggest hit singles, including "Far Behind" and "You", and was certified platinum by the RIAA four times. Their next two albums, Lucy and Happy Pills, ... more on Wikipedia

Candlebox is ranked on...

#702 of 2,187 The Greatest Musical Artists of All Time 13.4M VOTES When VH1 polled fellow artists to name the greatest artists of all time, it seemed like a good idea---but in reality, the li...
#424 of 2,217 The Best Rock Bands of All Time 3.3M VOTES There are thousands of rock bands that have existed throughout the decades ever since the dawn of rock and roll, but only th...
#172 of 679 The Best Alternative Bands/Artists 197.2k VOTES At the end of the 1980s, at the peak of glam rock and hair metal, a new genre began to emerge from the underground. Since it...

Candlebox is also found on...