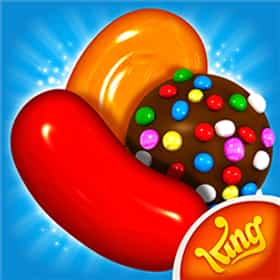 Candy Crush Saga is a match-three puzzle video game released by the developer King on April 12, 2012 for Facebook, and on November 14, 2012 for smartphones. As of March 2013, Candy Crush Saga surpassed FarmVille 2 as the most popular game on Facebook, with 46 million average monthly users. It is a variation on their browser game Candy Crush. The Daily Mail claims that the high profitability of the game has prompted the UK Office of Fair Trading to push for guidelines on games with exploitative game mechanics. A major expansion to the game was launched in December 2013. ... more on Wikipedia

Candy Crush Saga is ranked on...

#61 of 534 The Most Addictive Video Games of All Time 361.2k VOTES The most addictive games of all time, ranked by the wisdom of the crowd. Anyone can add their video game addictions to this ...
#10 of 52 The Most Addictive Mobile Games Of The 2010s 2.8k VOTES Mobile gaming has become a serious industry. It’s so serious, in fact, that analysts predict roughly 45% of 2019's entire ga...
#36 of 83 The Best Games That Never End 17.5k VOTES Back in the earliest days of gaming, the only reason a game would come to an end was due to the limitations of computing. Ga...
#8 of 49 The Most Addictive iPhone Games That You Can't Put Down 4.1k VOTES Addicting iPhone games are distractions that you simply can’t put down. They consume your waking hours (maybe even your drea...
#15 of 36 The Best Mobile Games For Kids 249 VOTES There's no shortage of great games available for mobile. However, not every game will be suitable for kids. With so many mob...
#19 of 20 The 20 Best Mobile Puzzle Games 428 VOTES Who doesn't like to sit back and relax with a nice little puzzle game on their phone? It's a great way to kill time and...
#17 of 86 The Most Popular Mobile Games Right Now 119.5k VOTES Gamers everywhere, we're ranking the most popular mobile games in 2020. Featuring both free games and paid games, this list ...