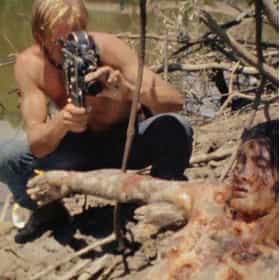 Cannibal Holocaust is a 1980 Italian cannibal film directed by Ruggero Deodato from a screenplay by Gianfranco Clerici, starring Carl Gabriel Yorke, Robert Kerman, Francesca Ciardi, and Luca Giorgio Barbareschi. Influenced by the works of Mondo director Gualtiero Jacopetti, the film was inspired by Italian media coverage of Red Brigade terrorism. The coverage included news reports Deodato believed to be staged, an idea which became an integral aspect of the film's story. Cannibal Holocaust was filmed primarily in the Amazon Rainforest with real indigenous tribes interacting with American and Italian actors. The film tells the story of a missing documentary film crew who had gone to the ... more on Wikipedia

Cannibal Holocaust is ranked on...

#483 of 571 The Greatest Movies Of The 1980s, Ranked 527.1k VOTES Since it was one of the greatest decades for film, here's a list of the best movies of the 80s. These are the most popu...
#23 of 110 The Most Horrifying Found-Footage Movies 64.4k VOTES In the mood for a frightful night? Browse through this list of the scariest found footage films, for movies with the most te...
#1 of 45 People who voted for Cannibal Holocaust... Men are 3x more likely to vote for this The Most Controversial Movies of All Time 91.1k VOTES Since the beginning of cinema, films have been pushing the boundaries of what society deems to be “acceptable entertainment....
#2 of 15 These Utterly Nasty Horror Films Are Sure To Make You Feel Queasy 3k VOTES Do you feel the Halloween spirit year-round? Do you wish it was socially acceptable to wear fake blood to the office? Well, ...
#22 of 137 The Goriest Movies Ever Made 272.7k VOTES Are you a fan of gory movies? If so, you’ve come to the perfect place to find a new favorite gory movie. Go ahead and browse...
#17 of 22 The Most Pretentious Horror Movies Ever Made 6.9k VOTES When an intelligent horror film is released, fans of the genre often judge it by its level of pretension. Movies like&n...
#34 of 35 35 Movies That Were Ridiculously Banned Around the World 8.7k VOTES The history of film is littered with movies that were banned for explicit scenes of excessive violence or gratuitous sex. Bu...
#16 of 42 The Most Gratuitous Torture P*rn Movies That Are Undeniably Sadistic 9.7k VOTES Bloody, gory, and full of splatter, torture p*rn has become a popular subcategory of the horror genre. The top torture p*rn ...
#10 of 14 Horror Movies Nobody Who Is Squeamish Can Finish, Ranked 631 VOTES Whether it's gross-out horror, extreme slashers, or just horror movies that are downright disturbing, not every movie i...
#2 of 20 Horror Movies That Aren't Really Scary, They're Just Gross 433 VOTES More often than not, the most disturbing horror films are synonymous with their gruesomeness. Movies that focus on gore over...
12 Horror Movies That Got People Jailed, Punished, or Officially Investigated 1.3M VIEWS Gruesome murder. Illegal trespassing. Moral indecency. Child Endangerment. Animal cruelty. What sound like plot po...
#1 of 35 The Best Exploitation Movies 779 VOTES This is a list of all the best exploitation films of all time, many of which are streaming on Netflix and Amazon Prime. Th...
15 Controversial, Disturbing Horror Movies That Were Banned 231.6k VIEWS Horror films have been around for almost a century, and many are beyond disturbing. Some horror movies take their nasti...
#26 of 44 The Best Splatter Movies 908 VOTES Here it is, folks, a list of all the best splatter films of all time, many of which are streaming on Netflix Instant and Ama...
#13 of 30 The Best Italian Horror Movies 890 VOTES For those looking for a terrifying film that isn't the same old American stuff, check out this list of the best Italian horr...
Horror Movies Rob Zombie Has Awarded His Personal Stamp Of Approval 47.2k VIEWS It’s Friday night, you’re spending hours scrolling around looking for a scary movie to watch, but nothing is grabbing your a...

Cannibal Holocaust is also found on...