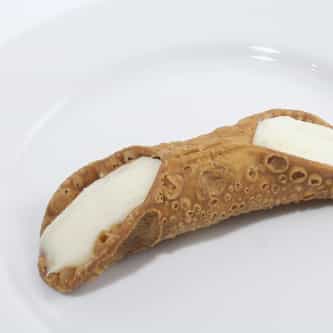 Cannoli are Sicilian pastry desserts. The singular is cannolo, meaning "little tube", with the etymology stemming from the Arabic "Qanawat". Cannoli originated in Sicily in Piana degli Albanesi and are a staple of Sicilian cuisine. They are also popular in Italian-American cuisine. In Italy, they are commonly known as "cannoli siciliani", Sicilian cannoli. Cannoli consist of tube-shaped shells of fried pastry dough, filled with a sweet, creamy filling usually ... more on Wikipedia

Cannoli IS LISTED ON