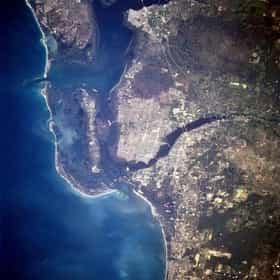 Cape Coral is a city located in Lee County, Florida, United States, on the Gulf of Mexico. Founded in 1957 and developed as a master-planned, pre-platted community, the city grew to a population of 154,305 by the year 2010. With an area of 120 square miles, Cape Coral is the largest city between Tampa and Miami. It is a principal city in the Cape Coral – Fort Myers, Florida Metropolitan Statistical Area. The population estimate for the statistical area was 645,899 for 2009. The city is known as a "Waterfront Wonderland", since with over 400 mi of navigable waterways, Cape Coral has more miles of canals than any other city in the world. ... more on Wikipedia

Cape Coral is ranked on...

#336 of 372 The Coolest Cities in America 126.7k VOTES This super cool list of the coolest cities in the U.S. has been ranked by the many chill, awesome people who have visited or...
#13 of 40 The Best Cities for Allergies 1k VOTES List of the top cities for people with allergies. It comes around every Spring, that plague known as allergy season. You may...