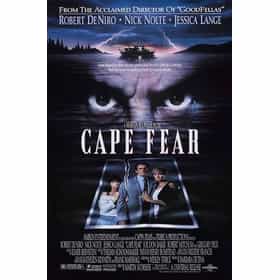 Cape Fear is a 1991 American psychological thriller film directed by Martin Scorsese and a remake of the 1962 film of the same name. It stars Robert De Niro, Nick Nolte, Jessica Lange and Juliette Lewis and features cameos from Gregory Peck, Robert Mitchum and Martin Balsam, who all appeared in the 1962 original film. The film tells the story of a convicted rapist who, using mostly his newfound knowledge of the law and its numerous loopholes, seeks vengeance against a former public defender whom he blames for his 14-year imprisonment due to purposefully faulty defense tactics used during his trial. The film marks the seventh of eight collaborations between Scorsese and De Niro, ... more on Wikipedia

Behind The Scenes Of 'Cape Fear,' Robert De Niro's Most Unsettling Role 96.8k views In 1991, Martin Scorsese teamed up with Robert De Niro to make one of the most unsettling psychological thrillers of all tim...
The Best Cape Fear Quotes 17 votes The best Cape Fear quotes make you realize how great the movie really is, even if you haven't seen it in a while. Let's rank...

Cape Fear is ranked on...

Cape Fear is also found on...