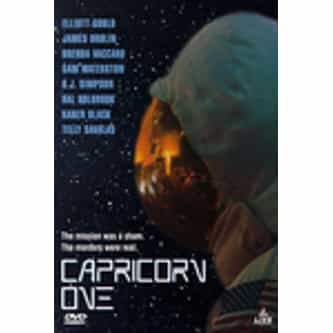 Tagline
The mission was a sham. The murders were real.
Would you be shocked to find out that the greatest moment of our recent history may not have happened at all?

Capricorn One is a 1978 government conspiracy thriller film about a Mars landing hoax. It was written and directed by Peter Hyams and produced by Lew Grade's ITC Entertainment. It stars Elliott Gould with James Brolin, Sam Waterston and O. J. Simpson as the astronauts. ... more on Wikipedia

Amazon Women on the Moon

Beneath the Planet of the Apes

Capricorn One IS LISTED ON