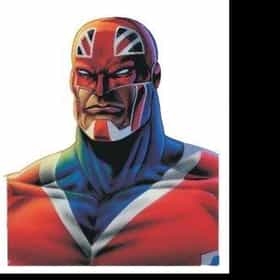 Captain Britain, is a fictional character, a superhero appearing in the comic books published by Marvel Comics. Created by Chris Claremont and Herb Trimpe, he first appeared in Captain Britain Weekly #1. The character has been used in stories through the years by many people, most notably Chris Claremont, Alan Davis, and Alan Moore. The character was initially intended to be a British equivalent of Captain America. Endowed with extraordinary powers by the legendary magician Merlyn and his daughter Roma, Captain Britain was assigned to uphold the laws of Britain. ... more on Wikipedia

Captain Britain is ranked on...