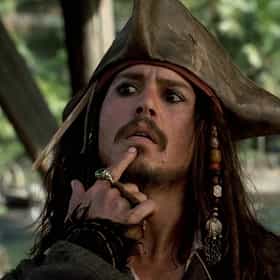 Captain Jack Sparrow is a fictional character and a main protagonist in the Pirates of the Caribbean film series. The character was created by screenwriters Ted Elliott and Terry Rossio, and is portrayed by Johnny Depp, who based his characterization on Rolling Stones guitarist Keith Richards and cartoon character Pepé Le Pew. He first appears in the 2003 film Pirates of the Caribbean: The Curse of the Black Pearl. He later appears in the sequels Dead Man's Chest, At World's End, On Stranger Tides, and Dead Men Tell No Tales. In the films, Sparrow is one of the nine pirate lords in the Brethren Court, the Pirate Lords of the Seven Seas. He can be treacherous and survives mostly ... more on Wikipedia

Jack Sparrow is ranked on...

#3 of 3,792 People who voted for Jack Sparrow... People under 30 are 2x more likely to vote for this also upvote Lord of the Rings Franchise on The Best Movies of All Time The Best Movie Characters of All Time 1M VOTES List of the best movie characters of all time, ranked by film buffs and people like you. This list includes performances by ...
#39 of 174 The Best To Worst Kingdom Hearts Characters 25.2k VOTES Kingdom Hearts is a magical action-adventure RPG gaming series combining the worlds of Disney and Final Fantasy, b...
#13 of 102 Movie Tough Guys Without Super Powers or a Super Suit 36.2k VOTES In the age of the superhero movies, it's easy to forget sometimes that there are tough guys who don't need to hide behind su...
#2 of 93 The Most Likable Movie Antiheroes 56.6k VOTES What makes an antihero cool? Well, they’re usually pretty multi-dimensional. They possess villainous qualities, yes, but the...
#13 of 65 The Most Notorious Skeleton Characters of All Time 24.4k VOTES Animated human skeletons have been used as a personification of death since the Middle Ages. From Jack Skellington to Skelet...
#28 of 143 The Most Hardcore Big Screen Action Heroes 119k VOTES There are certain things that make the best movie heroes completely badass - that swagger, that style and most of all, the a...
#18 of 70 The Best Fictional Characters You'd Leave Your Man For 74.1k VOTES We all like to fantasize and daydream about our favorite hot fictional characters. Maybe you've struck some kind of a deal w...
#18 of 20 Which Fictional Fighter Would Destroy All Others In A Sword Fight? 18.6k VOTES Sword fights and epic blade duels have been a staple of fiction since the dawn of storytelling, and extreme skill with ...
#1 of 28 The Greatest Pirate Characters in Film 109.9k VOTES They're swashbuckling. They're bold. And they're always on the wrong side of the law. The greatest pirate characters in movi...
#13 of 35 Film and TV Characters Most Doomed to Spend Forever in the Friendzone 5.2k VOTES "Friendzone" – a hellish pit of loneliness one finds himself (or herself) when the object of his/her affections sa...
#1 of 25 Johnny Depp's Weirdest Hairstyles, Ranked 7.7k VOTES Thanks to movies like Charlie and the Chocolate Factory and Edward Scissorhands, we're pretty used to seeing Johnn...
#2 of 20 25 Side Characters That Stole the Spotlight 6.8k VOTES A list of supporting characters who stole the show so hard that they deserve spinoffs of their own (if they don't have them ...
#1 of 105 Fictional Characters Named Jack 6.9k VOTES List of notable fictional characters whose name is Jack, including photos when available. The fictional characters named Jac...
8 Stars Whose Unpopular Acting Methods Created Hugely Popular Characters 36.6k VIEWS Actors can be divas, but sometimes actors "acting out" can actually work in a film's favor. In a few cases,&n...
#18 of 31 Easy Costumes If You Already Have A Beard or Mustache 449 VOTES With Halloween closing in fast, it's time to turn to your closet and see if you have anything that you can make a last-minut...
#1 of 41 The Best Johnny Depp Characters of All Time 37.4k VOTES Johnny Depp characters list, ranked from best to worst with clips from the movie when available. Fans will also enjoy the ...
#1 of 32 The Best Characters in the Pirates of the Caribbean Movies 9.1k VOTES Ahoy, matey! We're ranking the greatest characters in the Pirates of the Caribbean franchise. From The Curse of th...
Fictional Pirates 12.7k VIEWS List of fictional pirates, who sailed the seven seas exclusively in our imagination. In popular culture, the romantic image ...
#3 of 17 The Best Treasure Hunters In Film & TV 297 VOTES   Pop culture is filled with characters who have a thirst for adventure. These characters have a strong desire to tra...
11 Amazing Roles That Christopher Walken Almost Played 2.9k VIEWS Before he won an Oscar, played like fifty gazillion villains, and made googly eyes cool again, Christopher Walken ...