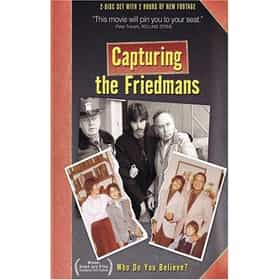 Winner of the Grand Jury Prize at the 2003 Sundance Film Festival, CAPTURING THE FRIEDMANS was the most riveting, provocative, and hotly debated film of the year. Despite their predilection for hamming it up in front of home-movie cameras, the Friedmans were a normal middle-class family living in the affluent New York suburb of Great Neck. One Thanksgiving, as the family gathers at home for a quiet holiday dinner, their front door explodes, splintered by a police battering ram. Officers rush into the house, accusing Arnold Friedman and his youngest son Jesse of hundreds of shocking crimes. The film follows their story from the public’s perspective and through unique real footage of the ... more on Wikipedia

Capturing the Friedmans is ranked on...

#538 of 544 The Best Movies of the 2000s 69.9k VOTES List of the best films released between the years 2000 and 2009, the era frequently referred to as the '00s or the "aug...
#90 of 176 The Best Movies of 2002 13.2k VOTES A list of the best movies of 2002, from dramas like Road to Perdition to cult classics like Adaptation. The '00s were a deca...
#19 of 395 People who voted for Capturing the Friedmans... are 20x more likely to vote for Paradise Lost: The Child Murders at Robin Hood Hills on this list are 11x more likely to vote for The Thin Blue Line on this list The Greatest Documentaries of All Time 19.7k VOTES List of the best documentary movies of all time, as rated by the Ranker Community. Non-fiction films, or documentaries, were...
#7 of 51 Life-Changing Documentaries You've Got to See 880 VOTES Nothing can match the drama of real life. Must see documentary movies underscore that point by highlighting intriguing ind...
#5 of 18 These Documentaries Took A Hard Left Turn And Left Audiences Shocked And Confused 22k VOTES Sometimes, the best stories are the ones where nothing goes as planned. The classic twist-ending synonymous with Hollywood t...
#215 of 227 The Best Biography Movies 2.2k VOTES A list of all the best biography movies ever made, many of which are streaming on Netflix and Amazon Prime. This biopic movi...
#21 of 36 The Best British Documentaries 285 VOTES The British are frequently considered the best journalists on the planet, so it adds up that they would make fantastic docum...
#25 of 48 The Best Movies About Child Abuse 2.8k VOTES Child abuse and domestic violence have steadily increased throughout the years, and sadly it is a common problem in many Ame...
#33 of 54 The Best Intelligent Documentaries of All Time 186 VOTES Intelligent documentaries really aren't hard to come by, as most of them set out to inform in some way or another. Neverthel...

Capturing the Friedmans is also found on...