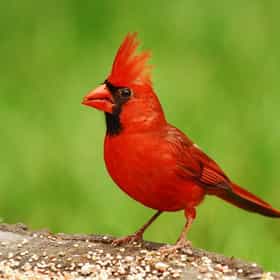 Cardinals, in the family Cardinalidae, are passerine birds found in North and South America. They are also known as cardinal-grosbeaks and cardinal-buntings. The South American cardinals in the genus Paroaria are placed in the tanager family Thraupidae. Contrariwise, DNA analysis of the genera Piranga (which includes the scarlet tanager, summer tanager, and western tanager), Chlorothraupis, and Habia showed their closer relationship to the cardinal family. They have been reassigned to that family by the American Ornithological Society. ... more on Wikipedia

Cardinal is ranked on...

#81 of 120 People who voted for Cardinal... also upvote Twilight Saga Franchise on The Worst Movies Of All Time also upvote Star Wars Franchise on The Best Movies of All Time Animals with the Cutest Babies 72.3k VOTES Adorable baby animals: Everyone loves them. But which young animals are actually the cutest? Until now, science has had no w...
#5 of 20 20 Mind-Blowing Photos Of Half Albino (AKA Leucistic) Animals 119.8k VOTES Nature can be both weird and beautiful at the same time, and nothing exemplifies this like the leucistic creatures of t...
38 Incredible Albino (and Leucistic) Animals 4.5M VIEWS Albino animals have a genetic mutation that causes an absence of tyrosinase in their pigment cells, which means they don't...